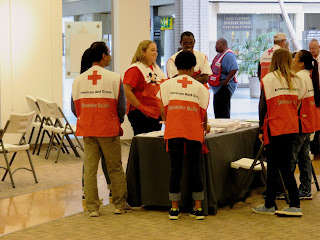 As people in South Carolina continue to clean up after devastating flooding, community partners are joining forces to help families begin to recover. At several Multi Agency Resource Centers – or MARCs – now open across the state, volunteers from organizations including the Red Cross, Salvation Army, Save the Children, South Carolina Legal Services and the NAACP are working together to offer a wide array of information and assistance to those in need.

Recently, a new MARC was opened at Dutch Square shopping center in Columbia. As local residents checked in to this “one stop shop” for flood relief, they were greeted by members of the Red Cross “VolunTEENs,” a group of nearly 30 young people with family ties to Fort Jackson. These teens – all children of active or retired Army personnel – “provide Red Cross services to the local community and the young people of Fort Jackson,” according to the VolunTEENs’ constitution.

The Red Cross VolunTEENs of Fort Jackson hold monthly meetings to review and plan local service acitivities throughout the year. Youth Chair Mary Reardon, whose daughter is an active VolunTEEN, willingly supports their efforts, but stresses the importance of letting young people lead the way. “This program is all about growing future leaders,” she says. “The teens coordinate their own meetings, perform many hours of community service, and keep the program strong by raising funds and welcoming new members on a regular basis.”

At their October meeting, the VolunTEENs agreed to postpone their regularly scheduled activities and focus instead on helping people affected by the recent floods. Despite having lived in South Carolina for a short time in most cases – only as long as their parents have been stationed at Fort Jackson – the teens have developed strong ties to the community by volunteering with the Red Cross. When disaster struck, they were eager to help.

In preparation for the opening of the MARC in Columbia, the VolunTEENs spent a day distributing fliers in flood-affected neighborhoods to let people know how to get assistance. The next day, they were the friendly faces welcoming those people to the MARC and helping them take the first steps toward recovery. In this way, and many others, the VolunTEENs of Fort Jackson are, indeed, developing as future leaders. Through their actions, they embody the care and compassion that define the American Red Cross.
at October 20, 2015