Robert and Sonja Frost went to bed on Saturday, October 8, like any other night. So the last thing Sonja expected when she stepped out of her bed in the middle of the night was to be standing knee deep in water. She had no idea where the water was even coming from as it continued to rise.

Sonja would soon come to realize their entire home was flooded because Hurricane Matthew had arrived unexpectedly arrived in their hometown of Florence, South Carolina.  The magnitude of the storm was nothing anyone had predicted for this area.  All the effects of Hurricane Matthew had been anticipated on the coastal area which was 150 miles away from Florence. No one in this part of South Carolina saw this coming. No one was prepared.  Sonja and Robert evacuated to Wilson High School in Florence.  Red Cross volunteers worked closely with them to ensure all of their basic needs were met.  This was especially important in Sonja’s case as she has Chrohn's disease, which left her with a colostomy.  It was vital that Sonja be in a sanitary environment so she did not contaminate the colostomy site and risk infection.  It was also important that Sonja have all of her medication and she had to leave her home so quickly that she did not have enough time to get them.

“I think the Red Cross has been very helpful,” said Robert.  “Tracy and Carol, Red Cross medical volunteers, have paid close attention to my wife’s condition. They even made certain to get the medications that my wife needed.”

The changing needs of this response operation have required the Frost's to have to relocate to different shelters a number of times over the past week but Robert is grateful for support nonetheless.  “We understand that everyone is doing the best they can under these circumstances. No one knew how devastated Florence would be." 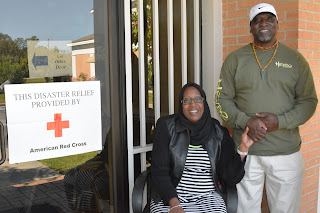