Volunteering is a Family Affair

While most kids his age were sleeping in and enjoying Columbus Day off from school, Cole Collins was wide awake at 5:00 a.m., setting up hundreds of cots in the parking lot outside of the Charleston, South Carolina Red Cross office. Cole, a Sophomore at Summerville High School, spent the day volunteering with the local Red Cross, like he had ever since his family learned that Hurricane Matthew was headed for their community on Friday.

Cole has a special connection to the Red Cross. His father, Chris Collins, is the Senior Disaster Program Manager and the Director of Long Term Recovery for the Red Cross in South Carolina. Cole first became a Red Cross volunteer during Tropical Storm Hermine, when the South Carolina region, and his dad, leapt into action to help.

But it's just not the father son duo leaping into action. With thousands of South Carolina residents fleeing to Red Cross shelters, Chris's sister Jaime Hayes, a registered nurse, saw a need and responded.

"When this started and we stood up the operations center, my sister came by and saw first-hand a huge need for nurses for all these shelters," said Chris. At the height of the operation, Jaime provided health services for 13 different shelters.

"It's just amazing to have my sister and son helping the people of Lowcountry," said Chris, "It's a great thing to be working, sweating, and seeing my son doing the same things as me when he doesn't have to be."

For Cole, the disaster response has brought the family closer together than ever before. While they live across the street from each other, he reported that he never felt as close to his aunt as he does working side by side with her as a Red Cross volunteer.

Cole has even recruited his friends to get in on the Red Cross volunteer action, moving 600 cases of water and thousands of meals for multiple shelters. 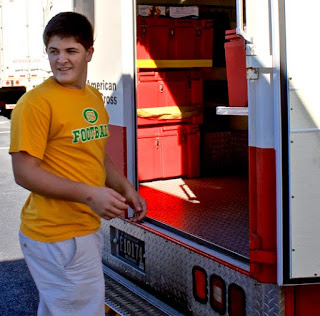