Ed and Dolly Ballard: Love, Marriage and the Red Cross

For six years, Ed and Dolly Ballard have started their days at the American Red Cross of Lowcountry SC’s chapter. They arrive around 6:30 in the morning and spend several hours helping others. At the height of their time with the organization, they spent five days a week volunteering.  The couple, now in their mid-70s, continues to help prevent and alleviate human suffering.

They don’t just spend time in the Palmetto state, they’ve been across the country to help others.

In fact, they deployed together six times over the last 18 months. They helped folks recover from flooding in Louisiana. They were in Georgia to help after a tornado touched down. They went to Texas twice to help people impacted by Hurricane Harvey and then headed to California. Most recently, they returned from Kentucky after flooding forced people from their homes.

While in the Bluegrass state, they helped throw a surprise 50th birthday party for a woman staying in one of the shelters. You can read that story here: http://bit.ly/2FOAjA4.

“It’s a good experience being deployed because you find out a lot of different things, meet a lot of different people,” said Dolly. “It gives you a good feeling that you know you can help these people get back into their own homes or finding a place to go.”

The couple began volunteering with the Red Cross once retirement knocked on their door. When they’re not deployed, they’re organizing shelter locations, teaching young children about fire safety through the Pillowcase Project, and working with survivors of home fires.

“Whatever needs to be done, I’ll do it,” said Ed. “As long as I’m qualified,” he added with a laugh.

Throughout their time with the Red Cross, this couple has helped hundreds, if not thousands of people. While deployments can be difficult, they said it’s all about giving back. It’s all about doing something to help others.

“It’s gratifying,” Ed said. “Even if you don’t get thanked, you know the thanks is there. We do it because we want to do it.”

“I just don’t want to stay home and do nothing when I can help people,” added Dolly. “I like being out with the people, talking with them.”

If you want to join Ed and Dolly by volunteering with the Red Cross, go to redcross.org/volunteer
at March 19, 2018 No comments:

In just a matter of hours, Earl Woodberry went from jumping out of planes in the Central American jungle to sitting in Andrews Air Force base with nothing but his rucksack and peaches. Woodberry was a Sergeant in the 82nd Airborne in 1978. He was training in the jungle, when the news came.

“All of a sudden a helicopter came in. A few minutes, the company commander and platoon leader came up and they said, ‘sorry to inform you but your father passed away last night,’” he remembered. 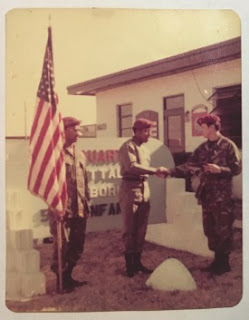 Immediately, Woodberry was on a helicopter and then a plane to North America. After several trips,
Woodberry landed at Andrew’s AFB in the middle of the night, with no money.

“You didn’t need money in the jungle,” Woodberry said with a laugh.

He’d have to rely on his c-rations to get him by. To make matters more difficult, the only plane available to take him to Fort Bragg, NC was a C-130 Blackbird.  That would allow him travel on to Mullins, SC for his father’s funeral.  He didn’t have a security clearance, which meant no flight out until late the next morning.

That changed after a conversation with a General who stumbled upon Woodberry sitting by himself on his rucksack.

“A few minutes later, this lady in a Red Cross dress and uniform came up to me and said, ‘Sergeant, I understand that you don’t have any money. I have this check and need you to sign it. Then, I’ll cash it for you,’” he recollected.

In addition to getting him money immediately, the Red Cross and the General found a way to get Woodberry home on that C-130.

Fast forward 40 years -- Woodberry has found a new purpose: helping military families throughout Lowcountry. His Woodberry’s position is possible because of a grant through AmeriCorp’s Frontline Families program.  A retired school teacher from Berkeley County, he now briefs service members and their families about Red Cross services before they’re deployed.

“Lots of times, we’ll see a service member deploy, and their spouses don’t know what to do when an emergency happens. We want them to get to know us before they need us.”

While it’s been forty years since he needed help, what remains a defining memory for Woodberry was the sight of that Red Cross uniform in the middle of the night.

“I remember it so well because it was like 3 o’clock in the morning, and the Red Cross was there, bright and early to help. It’s one of those things I’ve never forgotten,” he said.

For more information on how the Red Cross helps service members, their families and veterans, go to redcross.org/military.

After her training, Elliott started teaching Red Cross swim lessons at summer camps. During her time at one camp in 1958, Elliott realized what she wanted to be when she grew up.

“Most of the counselors were gals who were teachers, and so I thought, ‘Well they seem to be a happy lot, so I think that’s what I’ll head myself toward doing,’” she remembered.

Elliott would go on to teach for decades, retiring from Augusta Circle Elementary School in 1995. In addition to teaching, she continued to teach swimming lessons for both adults and children through the Red Cross. She has taught in Georgia, South Carolina and in New Jersey.

She particularly remembers her time in the Garden State, when her Southern accent proved a bit difficult for some children to understand as she explained not running around the pool.

“They all had these perplexed expressions on their faces, and I thought, ‘Am I not making myself clear?’ One little girl raised her hand and said, ‘What is a pool?’ They weren’t sure what I was talking about when I said pool with a Southern accent,” Elliott said with a laugh.

In addition to camps, Elliot also taught from time-to-time in neighborhood pools. When parents tried to pay her, Elliott wouldn’t have it.

Elliott has been honored by the Red Cross several times. She won the Clara Barton Award for Female Volunteer of the Year in 2001 and 2008. Her greatest joy nowadays is teaching children of her former students, while showing no sign of slowing down.

To find swimming classes near you, go to redcross.org/take-a-class/swimming. If you want to join Elliott as a volunteer, you can do so at redcross.org/volunteer.
at March 05, 2018 No comments: