As the threat of heavy rains and the potential for flash flooding comes to South Carolina this Memorial Day weekend, the Palmetto SC Region of the American Red Cross is reminding everyone to stay weather aware.

It is important for everyone to listen closely to local weather forecasts. The Red Cross urges everyone to follow the tips below.
HOW TO STAY SAFE
DOWNLOAD EMERGENCY APP People should download the free Red Cross Emergency App to receive emergency alerts and information about what to do in case of thunderstorms, flooding and other disasters, as well as locations of shelters. The App also includes emergency first aid information and a Family Safe feature which allows people to instantly see if loved ones are okay. The free Emergency App is available in app stores by searching for the American Red Cross or going to redcross.org/apps. 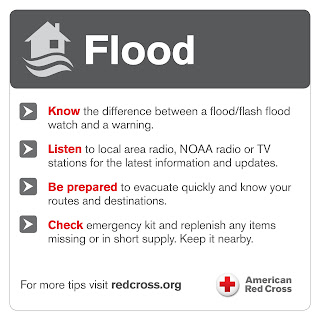 Together with its local fire department partners and volunteers, the American Red Cross of Lowcountry SC installed 1,122 smoke alarms during the Sound the Alarm home fire safety and smoke alarm installation event this past Saturday. The event was held in four communities throughout Charleston County. That number exceeds the goal of 1,000 smoke alarms installed.

In addition to installing free smoke alarms, the Red Cross and its partners also replaced batteries in existing alarms and helped families create escape plans. The sponsors included Bank of America, State Farm, G and P Trucking, Elliott Davis, LLC, SC Realtor’s Association, and South of the Border. The Red Cross thanks them all for their participation.

“I am so thankful for our staff members, volunteers and partners who made Saturday’s event incredibly successful,” said Amanda Baldwin, executive director of the Lowcountry SC Chapter. “Throughout the day, I talked to many appreciative residents whose homes are now safer because of the efforts from the Red Cross.”

So far this year in the Lowcountry SC chapter, the Red Cross has provided emergency assistance to 478 people and helped 158 families after a home fire. On average, the Red Cross responds to as many as six home fires every day in South Carolina.

Working smoke alarms in a home cut the risk of death by half, and having an escape plan further improves the odds of survival. The Red Cross wants to end these tragedies and save lives, the reason why the organization launched the Home Fire Campaign in 2014.

Across the state, the Campaign is making a difference. As of May 14, the Palmetto SC Region of the Red Cross and its partners across the state have saved at 53 lives.

Ebony Deloach was looking for something more. After graduating from college, she was excited to give back to the community she calls home.

“The most impactful thing for me is helping others,” Deloach said.

So, she began calling around to area non-profits. She found some opportunities but wanted to do more. That’s when she found the Palmetto SC Region of the American Red Cross. For the last five years, Deloach has been a virtual volunteer with Service to the Armed Forces and Disaster Services.

One of her main responsibilities is to work with families after they experience a disaster, such as a home fire or hurricane.

“It’s important to be able to have them know that I’m going to be there for them as a caseworker to help them through the whole process,” said Deloach.

She has recently been brought on to work with the Red Cross as a full-time employee. It’s a full circle experience, she said. In addition to being a passionate member of the Red Cross team, she is also a champion for those who have disabilities. Deloach must use a wheelchair to get around, but, that’s not stopping her. In addition to working 40 hours a week, she wants to volunteer for 2,000 hours this year.

“It’s important for me to let other people with disabilities know that volunteering with the American Red Cross is possible,” she said. “I have one of the best teams in South Carolina that’s been supporting me for these last five years.”

Deloach is one of the more than 3,000 people who call themselves Red Cross volunteers in South Carolina. More than 90-percent of the Red Cross’ workforce is made up of volunteers. If you’re interested in volunteering, go to redcross.org/volunteer or call your local Red Cross office.

“It’s the best decision I ever made,” Deloach said. “Whether you have 30 minutes or three hours to give, it’s important to give back.”