Janette Washington and her son were in church on Sunday when a message stuck with them. Not just a message of faith, but one of preparedness. Firefighters from the Georgetown County Fire Department spoke to the congregation about the importance of having working smoke alarms in their homes. The firefighters said they had free alarms to install from the Palmetto SC Region of the American Red Cross.

“I noticed there was just one in my house, so I decided we needed more,” Janette said.

Educating Georgetown residents about home fire safety is a goal of the Georgetown County Fire Department.

“Anytime we can get to a community event and talk about fire safety and smoke detectors, we’re there,” said Chief Mack Reed.

A few days later, the firefighters installed several alarms and discussed with Janette ways to escape from her home should a fire break out. She remembered filing away that conversation, never thinking she’d need to use it.

However, in April, as she was falling back asleep after severe weather woke her up, she heard the screeching sound coming from one of the newly installed smoke alarms.

“When I looked down the hall, all I could was the fire coming from the ceiling,” she remembered.

The mother quickly jumped into action to save herself and her 28-year-old son.

“She calls me, and she bangs on the wall: Timothy, wake up! The house is on fire,” said Timothy.

Within just a few minutes, the mother and son said the smoke began choking them. In that moment, however, Janette remembered: two ways to escape from every room in the house. She remembered they could escape from the back door.

The mother and son are alive today, thanks to the smoke alarms and knowing what to do when a fire occurs.

“It was very scary, but I know for a fact, if it hadn’t been for those fire alarms, I was going back to sleep,” Janette said. “They saved our life. We would have been gone, honestly.”

In the days following the fire, the Red Cross helped in another way. Volunteers helped the family by providing financial assistance for their immediate needs, replacing necessary medications that burned and providing referrals for other agencies that could help in their recovery.

“For me and my son, [the assistance] was a blessing because we didn’t have nothing at the time,” said the thankful mother.

Janette and Timothy are the 52nd and 53rd lives saved in South Carolina since the Red Cross’ home fire campaign launched in 2014. Together with its partners, the Red Cross has installed more than 57,000 free smoke alarms throughout the state over the last several years.

While much of her home is destroyed, what was not damaged was Janette’s sense of gratitude for the Georgetown County Fire Department, the Red Cross and the working smoke alarms.

“I’ve told a lot of people, if you don’t have one, don’t let a day go by because it’s true: they will save your life,” Janette said.

The Red Cross wants to thank all of the local fire departments, Fire Safe SC and Red Cross volunteers for helping save lives throughout South Carolina.

Red Cross Shares How to Have a Safe Fourth of July; Asks for Blood Donations Around the Holiday

The Fourth of July holiday will soon be here and many of us will enjoy the outdoors, watch fireworks or host a family picnic. The Palmetto SC Region of the American Red Cross wants everyone to enjoy their holiday and offers safety steps they can follow.

“The Independence Day Holiday is a great time for summer fun and we want to make sure everyone stays safe during their celebration,” said Louise Welch Williams, regional chief executive officer, Palmetto SC Region. “It’s also a time when the number of people giving blood decreases, but the need for blood donations continues. We are also asking that everyone consider giving blood over the holiday.” 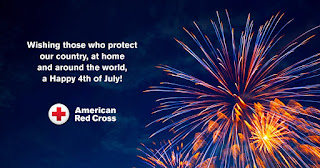 HAVE A SAFE FOURTH OF JULY

The safest way to enjoy fireworks is to attend a public fireworks show put on by professionals. Stay at least 500 feet away from the show. Many states outlaw most fireworks. Leave any area immediately where untrained amateurs are using fireworks. If you are setting fireworks off at home, follow these safety steps:
1.     Never give fireworks to small children, and never throw or point a firework toward people, animals, vehicles, structures or flammable materials. Always follow the instructions on the packaging.
2.     Keep a supply of water close by as a precaution.
3.     Make sure the person lighting fireworks always wears eye protection.
4.     Light only one firework at a time and never attempt to relight "a dud."
5.     Store fireworks in a cool, dry place away from children and pets.

1.     Hot cars can be deadly. Never leave children or pets in your vehicle. The inside temperature of the car can quickly reach 120 degrees. Check on animals frequently to ensure that they are not suffering from the heat. Make sure they have plenty of cool water.
2.     Stay hydrated by drinking plenty of fluids. Avoid drinks with caffeine or alcohol.
3.     Avoid extreme temperature changes.
4.     Wear loose-fitting, lightweight, light-colored clothing. Avoid dark colors because they absorb the sun’s rays.
5.     Check on family, friends and neighbors who do not have air conditioning, who spend much of their time alone or who are more likely to be affected by the heat. If someone doesn’t have air conditioning, they should seek relief from the heat during the warmest part of the day in places like schools, libraries, theaters, malls, etc. 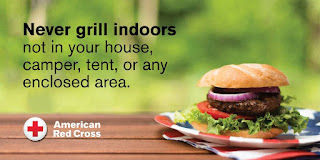 1.     Don’t leave food out in the hot sun. Keep perishable foods in a cooler with plenty of ice or freezer gel packs.
2.     Wash your hands before preparing the food.
3.     If you are going to cook on a grill, always supervise the grill when in use. Don’t add charcoal starter fluid when coals have already been ignited. Use the long-handled tools especially made for cooking on the grill to keep the chef safe.
4.     Never grill indoors. Keep the grill out in the open, away from the house, the deck, tree branches, or anything that could catch fire.
5.     Make sure everyone, including the pets, stays away from the grill.

DOWNLOAD RED CROSS APPS The Red Cross Emergency App can help keep you and your loved ones safe by putting vital information in your hand for more than 35 different severe weather and emergency alerts. The Red Cross First Aid App puts instant access to information on handling the most common first aid emergencies at your fingertips. Download these apps by searching for ‘American Red Cross’ in your app store or at redcross.org/apps.

Blood donations often drop around Independence Day due to fewer volunteer-hosted blood drives, and this year is no exception. With many donors on vacation, blood drive sponsors will not be hosting as many blood drives at their place of work, worship or community gathering. Hundreds of fewer blood drives are held the week of July 4 than an average week.

The Red Cross is urging those who have never donated blood or platelets, as well as current donors, to make a donation appointment now and help sustain a sufficient blood supply this summer. To encourage donations around the July Fourth holiday, those who come to give blood or platelets from July 2 – July 7 will receive a special edition Red Cross T-shirt as a special thank you, while supplies last.

To schedule an appointment to donate blood or platelets, eligible individuals can use the Red Cross Blood Donor App, visit redcrossblood.org, or call 1-800-RED CROSS (1-800-733-2767).