Give with Meaning this Giving Tuesday

November brings with it a chance for all of us to stop and give thanks. It’s a time to reflect upon the joys of life. And we want to use this time to give thanks for you. These last few months have been unprecedented, with three historic hurricanes, a mass shooting in Las Vegas, and wildfires in California.

We could not have responded without your help. We have realized just how generous South Carolina can be. Even young students have wanted to donate to our mission.

Earlier this month, we received a special donation and a heartfelt letter from the Junior Beta Club at Moultrie Middle School in Mt. Pleasant, SC. Over the last few weeks, the students held a donut fundraiser and sold Halloween Candy Grams to collect money for the Red Cross’ hurricane relief fund. At the end of the fundraiser, the students and faculty at Moultrie raised $850. We are honored they wanted to donate the money to the Red Cross. Their humility and desire to help have set such a fine example.

Donations help the Red Cross meet its mission of preventing and alleviating human suffering. Here’s what that looks like:

Disaster-trained volunteers are in your neighborhood, helping people who’ve been impacted by a home fire or other disasters. In fact, volunteers respond to a home fire every 3.9 hours, on average. That’s as many as six fires a day. On Thanksgiving Day, the Palmetto SC region of the American Red Cross helped 23 people after home fires throughout the state.

And the work doesn’t end with home fires.

Across the state last year, the Red Cross trained more than 31,000 people in lifesaving skills such as first aid, CPR and water safety. Volunteers and staff were in contact with nearly 27,000 military personnel and family members. And volunteers were in communities installing more than 26,000 smoke alarms.

Your Red Cross is there every day and every night to provide hope, care, and comfort.

Today is Giving Tuesday - a time when the public gives so generously to non-profit organizations. Today, we urge you to give something that means something. Whether it’s a donation of your time, of money or of blood.

Join with the Red Cross and caring people around the globe to make an impact on #GivingTuesday. Every gift counts. Please joins to make a difference and #GiveWithMeaning. Click here to donate!
at November 27, 2017 No comments: 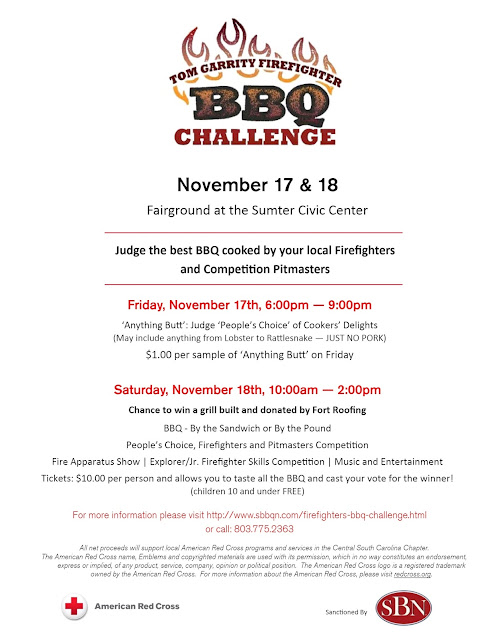 This year marks the eighth annual Tom Garrity Firefighters’ BBQ Challenge benefiting the local American Red Cross.  In 2010, Captain Tom Garrity embraced the challenge of firefighters competing against each other while cooking.  We all hear that firefighters are great cooks, so this is an opportunity to prove how good they were and offer comradery amongst different fire stations throughout the southeast.  Firefighters will come from as far as Virginia to compete.
As a volunteer firefighter, Tom witnessed firsthand the services provided by the American Red Cross to fire victims and wanted to help raise money for the organization. Tom had a vision to see the BBQ Challenge come to life and become an annual event that would grow each year. The American Red Cross, the Garrity family and Tom’s business associates, along with many firefighter friends continue to make Tom’s vision a reality.  All proceeds for this event will benefit the American Red Cross Local Chapter.

This year the event will be bigger and better than ever. There will be an “Anything Butt” competition on Friday, November 17th.  Tickets will be sold for tasting at the door. Saturday, November 18th will be the traditional Firefighters’ Challenge. The Southern Barbeque Network will sanction the event so teams can earn points for the SBN Competition. We will still have a Firefighters only competition for the Firefighter Pet Master along with the People’s Choice Award. The new addition is an open category for anyone to compete separately under the SBN. Each team will cook either a whole hog or Boston Butts. Anyone with a ticket will be able to taste and vote for the People’s Choice Award.  Our defending champions are Wedgefield Fire Station from Sumter. This year over $1,500 in prize money is up for grabs.

Another addition that will continue this year is the Explorer’s Jr. Firefighters Skills Competition. Teams will demonstrate their skills using bunker gear and hoses. The competition is limited to five teams with a minimum of four members, and a maximum of seven. It will take place while people walk around and enjoy the BBQ from the various teams. While there is minimal fee for the team to enter, there is no additional fee to watch the competition.

We will have entertainment the entire time including a puppet show about fire safety.

On Friday, November 17, for the Anything Butt Tasting Competition, gates will be open from 6-9 pm. Friday’s Anything Butt Competition will not have a ticket to enter but each sample will require a ticket to taste.  On Saturday, November 18th, gates open to the public and close at 2 pm. The Firefighters’ BBQ Challenge tickets cost $10, with children 10 & under free. Entry into the event provides each ticket holder the opportunity to sample each teams BBQ at no extra charge, while it lasts. Sandwiches, drinks and BBQ by the pound will be available for purchase until 2 pm. You can also pre-order a butt for carry out by contacting the Dutch Holland or Robert Pegram or any other committee member.

The American Red Cross responds to a house fire every four hours across South Carolina.   In the past 12 months, approximately 7,100 people were assisted after disasters, 169,000 pints of blood were collected and more than 26,000 smoke detectors were installed across the state.  The fact is an average of 91 cents of every dollar the Red Cross spends is invested in its humanitarian services and programs.

For more information or to enter the competition, contact Dutch Holland at 910-973-3223 or wldutchholland@gmail.com or call the American Red Cross at 803-775-2563.  To enter the Firefighters Master Skills Competition or the Fire Apparatus Show,  contact Robert Pegram at 803-460-4877 or rpegram@clarendoncountyfire.com .  Applications and rules for entry for all areas can be found at www.sbbqn.com/firefighters-bbq-challenge.html.  View the Facebook page at Capt. Tom Garrity Firefighters’ BBQ Challenge for more details and pictures of the event.
at November 13, 2017 No comments:

From Heartbreak to Hope: A Volunteer's Reflection on Disasters

Lisa Scott stood outside of the American Red Cross shelter in Corpus Christi, Texas and watched the bus unload. She saw faces of defeat, hopelessness, and desperation.

Those faces came from Rockport, an area that took a direct hit from Hurricane Harvey. Lisa, a new volunteer from the Upstate South Carolina Chapter of the Red Cross, knew everyone walking into that shelter needed compassion.

While working overnights, one of her jobs was cleaning the restrooms. It wasn’t glorifying work, she said, but it was one thing she could to show that compassion.

“I just tried to do things that made life a little bit better and little more normal for people,” she said.

Lisa also realized the simplest actions could have the deepest impact on everyone who needed help.

“They needed to talk, and they wanted to talk about what happened. I was just there to listen.”

One of the people she met was a six-year-old boy who was just about to turn seven. School was back in session, but the boy and his family were still staying in the shelter. He wanted to be able to take goodie bags to school to celebrate with his classmates. Lisa left the shelter to buy bags, candy, and toys. The next morning the boy wore the “Happy birthday” button Lisa also bought and was ready to go. Goodie bags in tow.

But, Lisa wanted to do one more thing. She rallied those who were around, and they all sang happy birthday. The faces of defeat, helplessness, and desperation, she said, turned into looks of joy, gratitude, and hope.

“It would make you cry. It brought tears to my eyes. It was very simple,” Lisa remembered.

But then disaster struck closer to Lisa’s home just a few weeks later.  A tornado tore through Spartanburg. Lisa got the call that she would need to open a shelter within an hour. She dropped everything.

“I know the people who were at the shelter got an understanding of the compassion we have, and the passion we have for helping,” she said.

In all, the Palmetto SC Region provided more than 900 meals and snacks to people in need. Weeks later, Lisa continues to work with families, helping them through their recovery. She is one of the thousands of volunteers who make up 90% of the Red Cross workforce. She is one of the heroes who has paused their life to help others through their worst days.

For her, it’s about helping. It’s about alleviating human suffering.

“Tomorrow, I would go wherever they needed me to go. I learned so much, and it just enriches your life,” Lisa said.

If you would like to learn more about becoming a volunteer, go to redcross.org/volunteer
at November 07, 2017 No comments: