Once again, the Palmetto SC Region of the American Red Cross has stepped in to help its neighbors throughout the country. 10Red Cross volunteers have deployed to various disasters.

Two volunteers are in Alabama helping residents recover after tornadoes impacted the area. Seven volunteers are currently in the Kansas/Nebraska area as record flooding inundates town after town. One volunteer is in Iowa as that area also experiences flooding.

The South Carolina volunteers will be assisting in a variety of ways while deployed. Some volunteers will assist in providing hot meals to those who need them and others will be operating shelters. Their deployments will last between two and three weeks.

More than 585 people spent Sunday night in 20 Red Cross and community shelters due to flooding in Mississippi, Kansas, Nebraska, Iowa, Wisconsin, Illinois and Minnesota. In areas where it is safe to do so, Red Cross Emergency Response Vehicles are going through neighborhoods, distributing food and relief supplies.

The Palmetto SC Region of the Red Cross stands ready to send additional volunteers, as needed.

The Palmetto SC Region of the American Red Cross is providing financial and recovery assistance to Edgefield County residents after a tornado touched down Sunday night.

Since the storm hit, Red Cross disaster-trained volunteers have been working with partners to assess the damage left behind from the storm. Volunteers have begun providing financial assistance, for immediate needs and lodging, to several families whose homes were damaged or destroyed. Volunteers will also work with families throughout the recovery process. 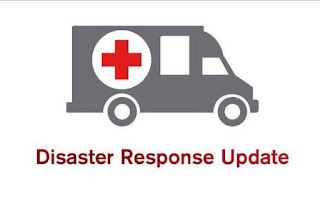 The Red Cross will continue to stay in contact with its partners to be sure the needs of area residents are being met.

HOW TO HELP Help people affected by disasters and countless other crises by making a gift to American Red Cross Disaster Relief. Your gift enables the Red Cross to prepare for, respond to and help people recover from disasters big and small.  People can donate by visiting redcross.org, calling 1-800-RED-CROSS, or texting the word REDCROSS to 90999 to make a $10 donation.

BECOME A VOLUNTEER To join us, visit redcross.org today to learn more about volunteer opportunities and how to submit a volunteer application.

DOWNLOAD EMERGENCY APP People can download the free Red Cross Emergency App now to be ready in case of a disaster in their community. They can use the app’s “I’m Safe” button to connect with their loved ones. The Emergency App can be found in the app store for someone’s mobile device by searching for “American Red Cross” or by going to redcross.org/apps.