From Hiking to Houston: A Volunteer's Journey

Deb Logan looked out of a second-story window at the George R. Brown Convention Center in Houston, Texas. She couldn’t believe what she was seeing: thousands of people left wondering if Hurricane Harvey spared their homes.

Deb had been volunteering with the American Red Cross of Upstate SC for just four months. Her first deployment was to Houston, five days after Harvey roared ashore.

“Just seeing all those people who couldn’t go home, it was heartbreaking,” she said.

Deb is a registered nurse. Her main responsibility in Houston was to take care of volunteers, some of whom walked 15 to 20 miles a day throughout the convention center. Even with blisters and cramps, Deb said the volunteers kept working. She called the dedication ‘overwhelming.’

She would be in Houston for several weeks. When she returned to her home in Clemson, Hurricane Irma knocked out her power and downed a large tree in her yard. But, just a few weeks after that, Deb was on a plane again. This time to Santa Rosa, California. Once again, she took care of volunteers who were sick and exhausted but kept going. 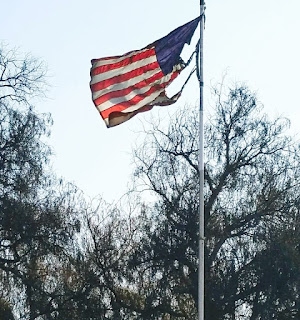 While Deb was driving around a devastated neighborhood one day, she saw a tattered American Flag. Perhaps it was weighted down with a layer of grief for what that area was going through. Still, though, that flag flew as best it could.

“I thought, ‘That really is what America is about: We are all here helping each other and we are going to take care of each other as a nation,’” she said.

She would return home only to fly out to California again. It was her third deployment in her eight-month tenure with the Red Cross. Deb was going to take some time off, but one night she saw video of flames devastating lives and destroying homes.

“I saw this fire, and I thought OK, I’ve got to go,” she remembered.

Why does she do it? Deb said earlier this year, she was enjoying retirement. She was training to hike the Appalachian Trail. It was strenuous, she said. And then she had a thought.

“I realized there’s not a lot of meaning in this other than a personal achievement. I was working really hard, and I thought, ‘Why wouldn’t I work hard to help people?’”

While the deployments have not been easy, Deb said they’ve been rewarding. She’s one of nearly 200 disaster-workers from South Carolina who have deployed all over the country to help people recover from disasters since August. For Deb, it’s not about her fatigue. It’s about the people she’s helped.

“I just have a heart for these people who are going through such tragedy,” Deb said. “I get something back because it really gives me a purpose in my life and retirement.”

A purpose tied together with a mission of alleviating human suffering.

Nearly 90-percent of the Red Cross’ workforce is volunteer based. That’s why the Duke Energy Foundation has provided $45,000 to branches of the American Red Cross across South Carolina to support its efforts of recruiting and training volunteers, just like Deb. These funds enable the Red Cross to enhance its volunteer base in critical areas throughout the state to ensure that well-trained volunteers are always ready to respond at a moment’s notice.