Jacoby, a 13 year old boy from Columbus, Indiana saw images of the devastation left behind by Hurricane Matthew while watching “Kid Behind the Camera”. As kids do, they were chatting about the recent episodes during a Boy Scout camping trip last weekend with his friends. Jacoby and his friends, Jasiah and Kayeden, started discussing ways they might be able to help.
Jacoby’s mother, Cathy Lucas, heard their conversation and offered to drive them to the affected areas.  “I was just so impressed that after being without their video games for three days on a camping trip that they wanted to give up the rest of their Fall Break and do this. I wasn’t about to say no to them,” explained Cathy.
“We’ve never traveled out of town to help in a disaster. It was fun to listen to them talk about what they might find when we got to our destination”.
The group came to the American Red Cross office in Charleston, 12 hours from their hometown, to offer to help in any way that they could. They immediately jumped in and began cleaning cots which had been used by people in our Lowcountry shelters.
Jacoby, who currently holds a Star rank in Troop 585 thinks that other kids “should definitely come do this because it’s a really fun state and it feels really good to help.”  When a Red Cross worker suggested that the boys track their service hours to turn in to their Scout Leader, he replied “we’re not really doing this for Scouts, we’re really just doing it to help”.
Jasiah, who used to live in Hardeeville, SC and holds a Life rank in Troop 301 said that others who want to help “should really come down. It feels good to help. I’ve done other service projects but this is the biggest and best one yet,” he added.
Kayeden, who currently holds a Star rank in Troop 585, wanted to participate because “it seems like we are helping people here. If this happened to me, I would want someone else to help us in a time of disaster.”
These three 13 year old boys are representing their troops well and clearly upholding their Scout Oaths:
On my honor I will do my best, to do my duty to God and my country, and to obey the Scout Law;
To help other people at all times; to keep myself physically strong, mentally awake and morally straight.
The  Scout Law states…A Scout is Trustworthy, Loyal, Helpful, Friendly, Courteous, Kind, Obedient, Cheerful, Thrifty, Brave, Clean, Reverent 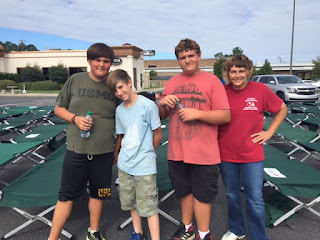