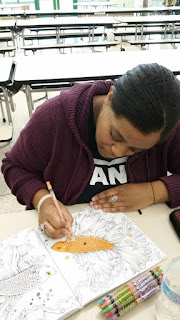 As Hurricane Matthew slowly made its way toward the Carolina coast, Johnnie and Josephine Tatum and their two adult daughters of Myrtle Beach, S.C., found safety in a Red Cross shelter.

The family said they heeded South Carolina Gov. Nicki Haley’s advice to take shelter if they were concerned about the storm and possible flooding. Johnnie, a former dispatcher and detention officer with the City of Surfside Beach, lost his legs over a period of time due to a car accident at age 17. Josephine is disabled from fibromyalgia. Both felt taking shelter was important for their family because the area where they live is prone to flooding.

“If we don’t do what we’re told, we cannot get help if we need it,” Johnnie said, referring to emergency officials’ warnings that anyone not evacuating could be left without emergency assistance during the worst part of the storm.

Hurricanes are not new to the couple, who lived along the coast in 1989 when Hurricane Hugo struck. They knew a Red Cross shelter would provide the safety their family needs since they had evacuated to a shelter once before.

“The Red Cross and shelter staff have been so helpful to us, we haven’t had to worry about a thing,” Johnnie said. 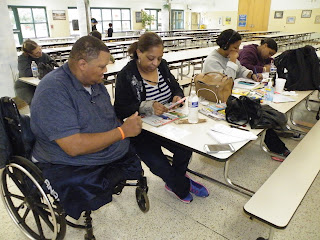 “We’re the type of people we take nothing for granted,” Johnnie added. “Just because it is the Red Cross, a big nonprofit, it doesn’t mean we expect them to waive a magic wand and give us all we want. Just give us enough to sustain us. We really do appreciate the fact that the Red Cross here has gone over and above to try to make us comfortable.”

The family made sure they brought supplies for their stay. Their daughters stocked up on adult coloring books to help pass the time. They also brought Netflix and playing cards so they could stay busy.

Josephine said her family appreciates that Red Cross volunteers set aside time with their own families and pets to help others.

“Nobody ever knows when they will need the Red Cross,” Josephine said. “We see the Red Cross as one of the most honest nonprofits with some of the best people. So, everybody needs to support them and donate.”

Photos and story by Angela Nicholas/American Red Cross
at October 08, 2016